Our newest speech therapist, Amelia, was invited to spend the day with Dr. Jeffrey Kestenberg from Coburg Dental Group. Dr Kesteberg is a dentist who specialises in laser frenectomies, that is, the removal of lip, tongue and cheek ties by laser.

The Coburg Dental Group on Moreland Rd is really close to our new Coburg clinic, and we are excited about the opportunity to build a close working relationship with their team.  Dr Kestenberg has a wonderful team which include dental hygienists and a midwife/lactation consultant. Together, they provided invaluable services to a number of infants and children throughout the day.

A number of years ago, Dr Kestenberg studied the use of laser dentistry from Dr. Larry Kotlow, a
paediatric dentist in New York. When he came home to Melbourne, he realised that the Australian
community had little awareness of the use of laser, and as such, had no immediate use for his new
skills. Eventually, he was contacted by a lactation consultant in Hobart who needed a dentist to
complete a laser removal of a patient’s oral ties. One patient turned into many more, and a steady
stream began to fly up for Dr Kestenberg’s services. Eventually, he began to make the flight down. A
dentist in South Australia discovered that Dr Kestenberg was flying down to Hobart, and requested
he do the same for their state. In time, Dr Kestenberg set up his own clinic; an addition to Coburg
Dental Group.

Many families present on the day of Amelia’s visit commented that Dr Kestenberg came highly
recommended, and 2 years ago, had a waitlist of several months. It was easy to see why – his
thorough knowledge and efficient process ensured that infants could be assessed, diagnosed and
have their ties corrected within an hour of arrival.

A lot of families didn’t know that we have a total of 5 frenums, or ties, in our mouth; One under each lip, two between our top gum and cheek and one under the tongue. When the frenum is short, tight and/or particularly restrictive, it may cause a functional impact on feeding or speech. These familieswere only learning about the frenums because of their little one’s troubles.

Each parent came with their individual, yet strikingly similar story of a baby who struggled to gain
weight, their dwindling supplies of milk, fussy and stressful feeds, and histories of vomiting, reflux or
apnoea. Other stories involved a baby who was spilling milk out of her nose or lips whilst feeding,
babies who were constantly gassy, or clicking noises made when feeding.

The signs and symptoms were each explained and were often resulting from one or more restrictive
frenums. Most of these signs were the result of a broken lip seal whilst feeding. When the seal was
broken (which made a clucking sound or resulted in spillage from the mouth or nose), the baby was
swallowing air as well as milk. This air had to be released at some point, and so the baby was quite
gassy or experiencing painful symptoms of reflux. As the baby was full of air and milk, he or she was
taking in less volume and requiring more frequent feeds. This was impacting mum’s supply of milk,
creating a vicious and frustrating cycle for baby and mum. 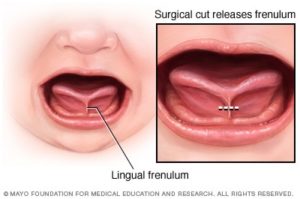 In order to feed from a nipple or bottle, the tongue needs to create a wave-like motion. This motion squeezes down and extracts milk, and then elevates the tongue to swallow. Have you ever tried to swallow whilst keeping your tongue down? It’s certainly not easy! Some posterior tongue ties can be so tight that this motion is prevented, and instead allows the tongue to only move in a forward-
backward motion. As such, the baby will tend to bite down on the nipple to extract milk.

Dr Kestenberg re-iterated to all patients that if there is no functional impact of a lip tie, there can be
a cosmetic concern. Lip ties can create a gap between the front teeth, which may require
orthodontic work. Amelia had braces and thinks it built character, but quickly laughed and asserted
that she (and her parents’ hip pocket) would have much preferred to avoid them.

Dr Kestenberg and Amelia chatted about their experiences of patients and clients with ties, and
about the importance of bottle choices. The Peristaltic Pigeon Plus Soft Touch was agreed to be a
bottle of choice due to the wide and short teat which allows ample space for the tongue to create
that desired wave-like motion.

We all have frenums within our mouth, and as with any body, they all come in different shapes and
sizes. An important question to ask is: Is this shape and size restricting function? Can my child feed,
or is this shape and size preventing nutrition, development and enjoyable mealtimes? If you are
finding mealtimes difficult, painful or counter-intuitive, seek an opinion from your speech
pathologist. Leave your child’s mouth in our hands.